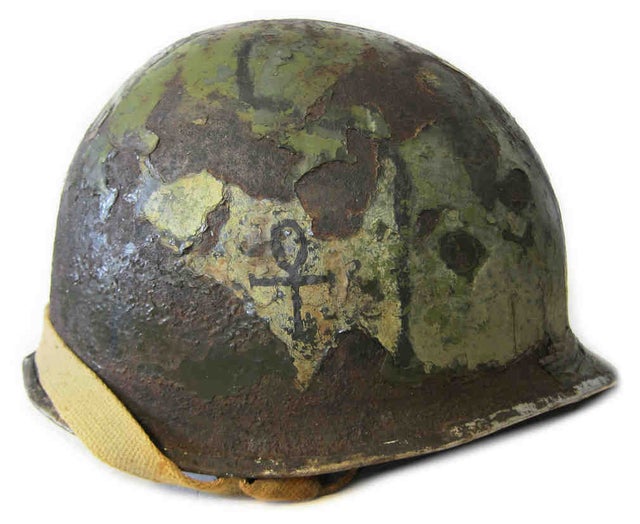 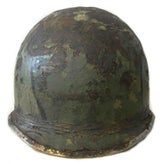 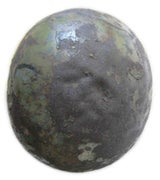 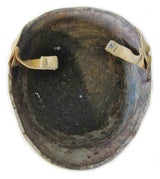 This is a 'Reproine' helmet - mixture of reproduction and genuine parts. The shell is a genuine WW2 McCord helmet. It is a front seam, stainless rim and the main paintwork is also original.

We have added the 'D' bales, the M2 chin straps, the 504th Ankh Cross, and the black camouflage separation lines. The rest of the helmet, including paintwork is original as found!

The regiment was first formed in mid-1942 during World War II as part of the 82nd Airborne Division and saw service in North Africa, Sicily, Italy, Anzio, the Netherlands, Belgium and Germany.

The outside has several coats of original paint - untouched by us. Some of this is WW2 period but we suspect there may be some Vietnam period paint present as well.

We have painted in the black camouflage separation lines and cross on each side and the rest of the painted shell is as found. This style of camouflage was introduced for the North African campaign and there are several surviving helmets demonstrating this pattern!

This helmet is heavily naturally aged and represents one found several years after the battle.

Inside the shell is untouched and 'as found' other than the addition of the 'D' bales. There are several strass fractures a feature found on early war US Helmets and lots of rust, although the shell is fully sound.

This helmet is a superb 504th PIR Helmet and would look great in any collection.