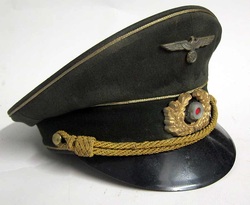 Friedrich Wilhelm Ernst Paulus Peaked Cap
This is what we call a 'reproine' - A combination of Reproduction & Genuine parts.

The Schirmmutzen hat is reproduction but made in Germany by the EREL owned company. We are the Worldwide dealers for aged EREL caps produced in Germany.

It is a super German Generals cap, made of top quality material and in the same method and materials as the originals. In aged condition it is difficult to tell does not date from WW2.

We have made up this cap to look exactly like a Friedrich Wilhelm Ernst Paulus cap, defender of Stalingrad. It is a Generals cap with gold braid, top quality materials and gold chinstrap, all suitably aged.  Leather liner, vulkanfibre peak and celluloid head liner are some of the outstanding features.

We have added original Generals Heer Eagle, wreath and cockade. These are original WW2 Eagle and Wreath and will stand up to any test of originality and are worth approx. £200 if sold separately.

Friedrich Wilhelm Ernst Paulus (23 September 1890 – 1 February 1957) was an Officer in the German military from 1910 to 1945. He attained the rank of Generalfeldmarschall (field marshal) during World War II, and is best known for commanding the Sixth Army in the Battle of Stalingrad, including the successful advance toward the city and the less successful attack in 1942 (Case Blue), stopped by the Soviet counter-offensives during the 1942-43 winter. The battle ended in disaster for Nazi Germany when about 265,000 soldiers of the Wehrmacht, their Axis allies, and the anti-Soviet Hilfswillige Russian volunteers were encircled and defeated. Of the 107,000 captured, only 6,000 survived the captivity and returned home by 1955.

Paulus surrendered to Soviet forces in Stalingrad on 31 January 1943, a day after he was promoted to the rank of Generalfeldmarschall by Adolf Hitler. Hitler expected Paulus to commit suicide, citing the fact that there was no record of a German field marshal ever being captured alive. While in Soviet captivity during the war, Paulus became a vocal critic of the Nazi regime and joined the Soviet-sponsored National Committee for a Free Germany.

Lets face it you will never own one of Paulus's caps. You will struggle to get a genuine Generals cap. So the next best thing is our Reproine made up of genuine and reproduction parts.