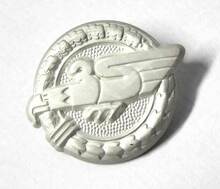 You cannot get hold of originals they are one of the rarest paratrooper badges around and would sell for approx £1000+ for a good example. Try a google search and see what you can find! This badge is in new condition and is perfect for re-enactors or collectors who want to augment their Paratrooper collection.

Richard Schimpf (16 May 1897 – 30 December 1972) was a highly decorated Generalleutnant in the Fallschirmjäger during World War II and a Generalmajor in the Bundeswehr. He was also a recipient of the Knight's Cross of the Iron Cross. The Knight's Cross of the Iron Cross was awarded to recognise extreme battlefield bravery or successful military leadership. Richard Schimpf was captured by American troops in March 1945, he was transferred to British custody until December 1947. He joined the post war Luftwaffe in 1957 and retired in 1962 as a Generalmajor. He instigated the badge around July 1944 to recognise his Division.

​The 3'd Fallschirmjager Division went into combat in June 1944 in Normandy. In August it was virtually destroyed in the area of Falaise. Formed again in Belgium thanks to replacements from 22nd, 51st, 53rd Luftwaffe Field Regiments. During September 1944 it fought as a part of Kampfgruppe "Becker" in Arnhem area. It surrendered in April 1945 to American troops in the Ruhr. We have changed several features to prevent it being passed as an original. 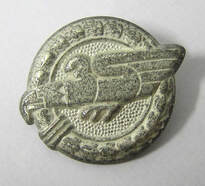 Schimpf Aged
​This Schimpf Badge is also available in aged condition. This is perfect for collectors who want to add it to their WW2 German Paratrooper badge collection or uniform display as it more closely reflects a badge found almost 70 years ago.

Notice the dark worn and tarnished areas that look identical to a genuine III FJD Badge. It has a lovely reverse patina, reflecting being worn on a wet and sweaty cap and a lighter finish on the front but with wear and ageing. Each badge is different in finish and thus unique to your collection.
Buy Schimpf Badge >> 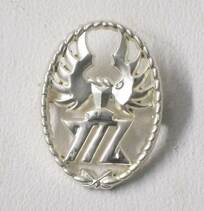 Very rare reproduction Meindel 2'd Fallschirm Korp Badge. The badge has been made to reflect an original but we have changed some of the detail to prevent it being passed as an original. This badge was used by German Paratroopers of the II Fallschirm Korp. from late 1943 to May 1945. You cannot get hold of originals they are one of the rarest paratrooper badges around and would sell for approx £1000+ for a good example. Try a google search and see what you can find! This badge is in new condition and is perfect for re-enactors or collectors who want to compliment their Paratrooper collection.

Eugen Meindl was born in Donaueschingen Germany. He served with the artillery from 1912. In World War I he commanded a platoon and later a battery and subsequently served as adjutant with the 67th Artillery Regiment and with the Artillery Commander, 52nd Corps. He served with various artillery units in the Reichswehr. Promoted to Hauptmann in August 1924, he was then assigned to the Reichwehr Ministry on September 14, 1926 and spent the ten years there before being promoted to Major.

In 1939 Oberstleutnant Meindl was given command of the 112th Mountain Artillery Regiment in Graz. As an Oberst he led the “Meindl Group” and made his very first parachute jump at Narvik. His transfer to the Luftwaffe followed on November 28th 1940, whilst commander of the “Assault Regiment Meindl” of the parachute troops.

In may 1941 Meindl parachuted into Crete near the Platanias Bridge, where he was shot through the chest. On February 26, 1942 Generalmajor Meindl became commander of the newly formed Luftwaffe Division Meindl in Russia and on September 26 he took over XIII. Fliegerkorps (later I Luftwaffe Field Corps). Meindl distinguished himself in the winter fighting in Russia, was named in the Wehrmachtbericht and on November 5, 1943 was promoted to commanding general of II Parachute Corps, which he led in the west on the invasion front and later at Cleves and in the Reichswald. Meindl’s corps fought with distinction at Goch and in the Wesel bridgehead. The Korps fought in Normandy and was virtually destroyed in the Falaise Pocket in 1944. The Korps was rebuilt and attached to 1st Fallschirm-Armee for the rest of the war. Meindl was taken prisoner and held until September 29, 1947. 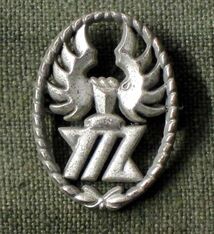 II Fallschirm Korp Badge
This badge was worn on the M43 sidecap and on occasions has been photographed being worn on the left breast of the luftwaffe field jackets. It is rarer than the standard WW2 German Army Paratroopers award badge and is one of the most sought after badges for collectors. The photographs do not do this badge justice, it is extremely detailed and very silver in colour - just like original issued badges.
Buy Meindel Badge >>
Copyright© 2022 www.WarHats.com