Cap used by Richard Widmark in the film 'Hell and High Water' 1954 - Sold but ask us about having a similar one made up to your specification: 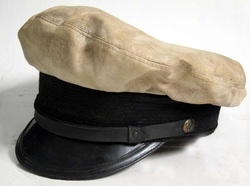 Hell and High Water is a 1954 Cold War drama film starring Richard Widmark, Bella Darvi and Victor Francen. The film was made to showcase CinemaScope being used in the confined sets of a submarine.

Before the credits, an off-screen, voice-over narrates:

"In the summer of 1953, it was announced that an atomic bomb of foreign origin had been exploded somewhere outside of the United States. Shortly thereafter it was indicated that this atomic reaction, according to scientific reports, originated in a remote area in North Pacific waters, somewhere between the northern tip of the Japanese Islands and the Arctic Circle. This is the story of that explosion."

This cap is a great cap to own in aged or new condition especially if you are into films, LARP (Live Action Role Playing), or SteamPunk (add some goggles and you will be rocking!). Infact, you will find very of these hats in LARP or Steam Punk - so set the trend!

Its also a great hat to own if you are into motorcyles, yachting, boating, 50's rock-a-billy or anything nautical if you don't want to wear a WW2 German Wreath and Eagle! Good little talking point, tell your friends its modelled on the one used in the Hell and High Water film! Wear it while piloting your vintage boat and look the part!

Aged version of this cap will be £260 GBP plus postage.