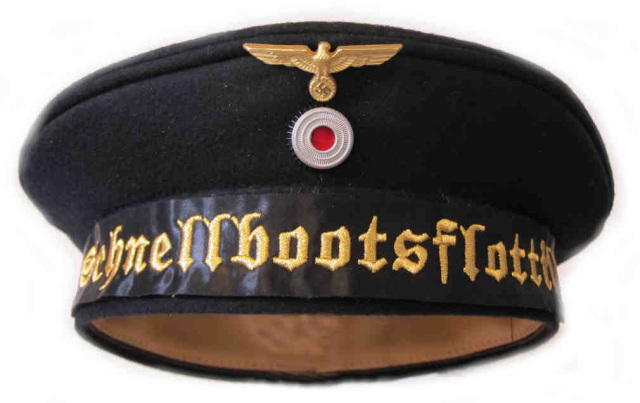 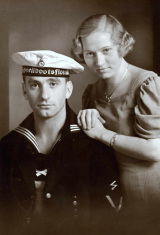 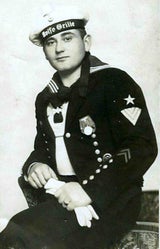 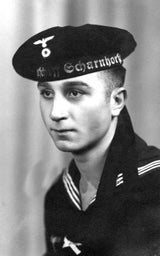 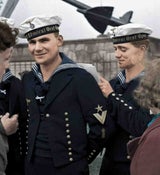 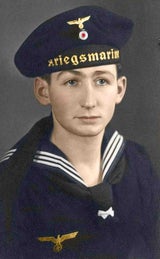 Reproduction WW2 Kriegsmarine Enlisted and NCO Cap Tallies. These are approximately 32mm tall and 150cm long. Choice of new, faded or aged condition. These tallies are made from black artificial silk which is a type of rayon material mixed with genuine silk.

Please note some tallies are BeVo pattern and some are embroidered - we copy originals to make these as accurate as possible and both variations are valid. Notice our aged tallies may have green verdigris on parts of the weave - just like many originals!

Please feel free to contact us if you require a different World War two cap tally making up. Please see details of each Tally at the bottom of this page.
Add to Cart
destroyer Z8 Bruno HeinemannThe following Tallies are available:

'Kriegsmarine' - Gold Gothic Font - New or Aged - Used on all surface and underwater ships during WW2 - worn as a generic 'Kriegsmarine' to conceal the identity of the actual vessel. BeVo type embroidery.

'Schlachtschiff Scharnhorst' - Scharnhorst was a German capital ship, alternatively described as a battleship or battlecruiser, of Nazi Germany's Kriegsmarine. She was the lead ship of her class, which included one other ship, Gneisenau. The ship was built at the Kriegsmarinewerft dockyard in Wilhelmshaven; she was laid down on 15 June 1935 and launched a year and four months later on 3 October 1936. During the Battle of the North Cape (26 December 1943), the Royal Navy battleship HMS Duke of York and her escorts sank Scharnhorst.

'Kreuzer Prinz Eugen' - Prinz Eugen saw action during Operation Rheinübung, an attempted breakout into the Atlantic Ocean with the battleship Bismarck in May 1941. The two ships destroyed the British battlecruiser Hood and moderately damaged the battleship Prince of Wales in the Battle of the Denmark Strait.  In February 1942, Prinz Eugen was deployed to Norway, although her time stationed there was curtailed when she was torpedoed by the British submarine Trident. In May 1945, she was surrendered to the British Royal Navy

'Aviso Grille' - was built in Nazi Germany for the Kriegsmarine in the mid-1930s for use as a state yacht by Adolf Hitler and other leading individuals in the Nazi regime. After the start of World War II in September 1939, Grille was used as a minelayer and as a patrol vessel in the Baltic Sea, tasked with searching for enemy merchant vessels.

'Schlachtschiff Gneisenau' - Gneisenau was a German capital ship, alternatively described as a battleship and battlecruiser, of Nazi Germany's Kriegsmarine. She was the second vessel of her class, which included her sister ship, Scharnhorst. After several successful engagements, in March 1945, she was sunk as a blockship in Gotenhafen (Gdynia) in German-occupied Poland. She was eventually broken up for scrap in 1951.

'Admiral Graf Spee' - Between September and December 1939, the warship sank nine vessels, before being confronted by three British cruisers at the Battle of the River Plate on 13 December. The ship inflicted heavy damage on the British ships, but she too was damaged, and was forced to put into port at Montevideo, Uruguay. Convinced by false reports of superior British naval forces approaching his ship, Hans Langsdorff, the commander of the ship, ordered the vessel to be scuttled.

'Schlachtschiff Tirpitz' in Sept 1943, along with the battleship Scharnhorst, bombarded Allied positions on Spitzbergen, the only time the ship used her main battery in an offensive role. Shortly thereafter, the ship was damaged in an attack by British mini-submarines and subjected to a series of large-scale air raids. On 12 November 1944, British Lancaster bombers scored two direct hits which caused the ship to capsize rapidly. A deck fire spread to the ammunition magazine for one of the main battery turrets, which caused a large explosion. The wreck was broken up by a joint Norwegian and German salvage operation after WW2.

'Schlachtschiff Bismarck' was the first of two Bismarck-class battleships built for Nazi Germany's Kriegsmarine and was completed in August 1940. Bismarck and her sister ship Tirpitz were the largest battleships ever built by Germany, and two of the largest built by any European power.

'Panzerschiff Deutschland' saw significant action with the Kriegsmarine, including patrols in the Spanish Civil War. She then participated in Operation Weserübung, the invasion of Norway. She next saw action at the Battle of the Barents Sea with the heavy cruiser Admiral Hipper. Sunk in shallow waters in the Kaiserfahrt in April 1945 by Royal Air Force (RAF) she was used as a gun battery to support German troops fighting the Soviet Army until 4 May 1945, when she was disabled by her crew.

'Unterseebootsflottille Weddigen' The 1st U-boat flotilla (German 1. Unterseebootsflottille) also known as the Weddigen flotilla, was the first operational U-boat unit in Nazi Germany's Kriegsmarine. Founded on 27 September 1935 under the command of Fregattenkapitän Karl Dönitz, it was named in honour of Kapitänleutnant Otto Weddigen. Weddigen, a U-boat commander during World War I.

'Unterseebootsflottille Hundius' The 6th U-boat Flotilla, also known as Hundius Flotilla, was a front-line unit of Nazi Germany's Kriegsmarine before and during World War II.

'Unterseebootsflottille Wegner' The flotilla, under the name "Wegener Flotilla", was founded in Kiel in June 1938. In September 1940, the flotilla left its base in Kiel and moved to St. Nazaire in France. After the change in location, the flotilla was renamed "7th U-boat Flotilla".

'Unterseebootsflottille Emsmann' The flotilla was formed in December 1938 in Kiel under the command of Korvettenkapitän Hans-Rudolf Rösing. It was named in honour of Oberleutnant zur See Hans Joachim Emsmann, a U-boat commander during World War I, who died on 28 October 1918 after his U-boat UB-116 was sunk by a mine. The flotilla was disbanded in January 1940 and the boats were all transferred to 1st Flotilla.

'Unterseebootsflottille Saltzwedel' - The 2nd U-boat Flotilla (German 2. Unterseebootsflottille), also known as the Saltzwedel Flotilla, was the second operational U-boat unit in Nazi Germany's Kriegsmarine. Founded on 1 September 1936 under the command of Fregattenkapitän Werner Scheer, it was named in honour of Oberleutnant zur See Reinhold Saltzwedel. Saltzwedel, a U-boat commander during World War I.

'Kreuzer Admiral Hipper' - Admiral Hipper saw a significant amount of action during the war, notably present during the Battle of the Atlantic. She led the assault on Trondheim during Operation Weserübung; while on-route to her objective, she sank the British destroyer HMS Glowworm.  On 3 May 1945, Royal Air Force bombers severely damaged her while she was in Kiel. Her crew scuttled the ship at her moorings.

'Panzerschiff Admiral Scheer' - saw heavy service with the German Navy, including a deployment to Spain during the Spanish Civil War, where she bombarded the port of Almería. Her first operation during World War II was a commerce raiding operation into the southern Atlantic Ocean; she also made a brief foray into the Indian Ocean.

'Kreuzer Blücher' was the second of five Admiral Hipper-class heavy cruisers of Nazi Germany's Kriegsmarine (War Navy). Blücher was assigned to the task force that supported the invasion of Norway in April 1940. Two torpedoes fired by a torpedo battery in a Norwegian fortress struck the ship, causing serious damage. A major fire broke out, which could not be contained. The fire spread to one of her anti-aircraft gun magazines, causing a large explosion, and then spread further to the ship's fuel bunkers. Blücher then capsized and sank with major loss of life.

'Linienschiff Schleswig Holstein' Served in WW1 and WW2. During WW2 it fired the first shots of the war as part of the invasion of Poland. It also took part in the invasion of Denmark. After the war the ship was raised during 1945–1946 by the Soviet Navy.

'Linienschiff Schlesien' saw combat during World War II, briefly bombarding Polish forces during the invasion of Poland in September 1939. She escorted minesweepers during Operation Weserübung, the invasion of Norway and Denmark in April 1940.

'Kruiser Königsberg' laid defensive minefields in the North Sea and then participated in Operation Weserübung, the invasion of Norway in April 1940. While attacking Bergen, she was badly damaged by Norwegian coastal artillery, and sunk by Fleet Air Arm Blackburn Skua fighter-bombers the following day in the harbour.

'U=Bootsbegleitschiff Saar' - Saar was the first purpose-built submarine tender (type of depot ship that supplies and supports submarines), of the German Kriegsmarine. Saar was assigned to the U-Boot-Abwehrschule ("Submarine Defence School") in Kiel-Wik, where submarine officers were trained. In 1935 she became tender to the Weddigen Flotilla (later the 1st U-boat Flotilla), in Kiel. In 1937, she was transferred to the Saltzwedel Flotilla (2nd U-boat Flotilla) at Wilhelmshaven. From July 1940, the ship served in the Baltic with the 21st, 25th, 26th and 27th U-boat Flotillas in Pillau and Gotenhafen. Towards the end of the war she was used as an accommodation ship by FdU East.

'Kreuzer Emden' - In 1937 and 1938, she briefly participated in the non-intervention patrols during the Spanish Civil War. At the outbreak of war, she laid minefields off the German coast and was damaged by a British bomber that crashed into her. She participated in the invasion of Norway in April 1940.

'Destroyer Bruno Heinemann' - blockaded the Polish coast and searched neutral shipping for contraband. In late 1939 and early 1940 the ship made three successful minelaying sorties off the English coast that claimed 17 merchant ships. She participated in the early stages of the Norwegian Campaign in early April 1940. The ship was transferred to France a year later to escort German ships. She was returning to France in early 1942 when she struck two mines and sank off the coast of Belgium.
Copyright© 2022 www.WarHats.com