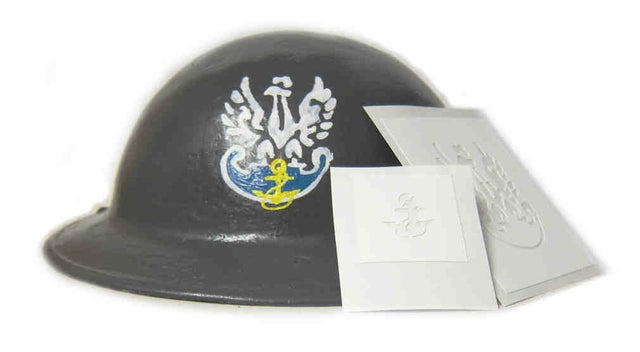 This stencil marking (Polski Szablon Spadochroniar) and other variations, were used on British Tommy helmets by the Polish Naval forces in WWII. Made to look 'hand painted'.

During the war the Polish Navy in exile was supplemented with leased British ships, including two cruisers, seven destroyers, three submarines, and a number of smaller fast-attack vessels. The Polish Navy fought alongside the Allied navies in Norway, the North Sea, the Atlantic and the Mediterranean, and aided in the escort of Atlantic and Arctic convoys.

The stencil is made from very high quality acrylic vinyl with tacky backing, which in layman's terms means its re-usable. Apply the white outline, then the blue paint and finally the anchor stencil in yellow. Paint in by hand the 'tabs'.