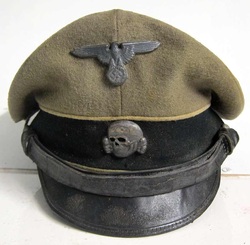 Waffen SS NCO Hat
This is a reproduction, private purchase, highly aged, Schirmmützen cap for a Waffen SS NCO (Non Comissioned Officer). The makers on the sweat pad has been been removed and the leather sweat band is dry and ripped in places. The cap has several green ageing stains. It looks like it has been found in the remains of the Stalingrad campaign.

It is a Waffen Schutzstaffel (Waffen SS), German NCO cap, made of top quality material and in the same method and materials as in the originals. In very aged condition it is difficult to tell does not date from WW2.

The insignia is high quality and both eagle and death heads skull insignia show heavy wear. The leather chinstrap has lost its stitching and is cracked in several places.

We have made up this cap to look like one which has been worn many times and then found a couple of years after the campaign in Russia.

The white piping is dirty and green in places and very old looking. There are several rips or moth holes underneath these can't be seen when the cap is in the upright position.

A genuine Waffen SS NCO cap in this condition will easily go to several thousand pounds, which is out of the price range of most average collectors. This one looks the part and is at a snip of a price.