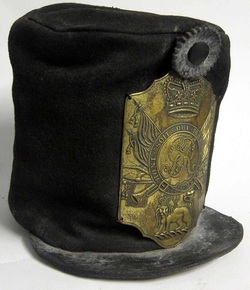 It was the culminating battle of the Waterloo Campaign and Napoleon's last. The defeat at Waterloo ended his rule as Emperor of the French, marking the end of his Hundred Days return from exile.

This is a reproduction Stovepipe shako based on a very rare Waterloo period shako for an enlisted man or NCO.

It has a black leather rosette supporting and a universal pattern dimpled GR (George III), helmet plate. This type was in use from 1799 to 1815.

The helmet is made from felt (very stiff felt), this one has been 'tarred' to make it waterproof and more rigid. It has a plume holder which is ripped and a leather peak which has also been 'tarred' and showing nice ageing.

The inside retains its cloth liner which is dirty and ripped in places, the orginal sweat band has gone but the hessian padding still mainly remains in places.

There is herringbone ticking covering all edges, again suitably aged. It has taken over 12 months to get the Stove-Pipe Helmet into this aged condition and tens of hours work. This is one of the most time consuming helmest we have produced alongside the Belgic Shako.

The 200th anniversary of the Battle of Waterloo takes place in 2015 and this sort of item will without doubt become very collectable around that time.

We associate this shako with a foot Regiment, part of Wellington's victorious army.

Original Waterloo helmets are extremely rare and command £9000+ prices when the do come on the market, which is a once in a lifetime. Even replicas made around 1915 to commemorate the battle are going for several thousand pounds.

This is also an identical shako to the ones worn by the British Foot troops in the American War of 1815, which was regarded by the UK as a 'sideshow' compared with the War with France.

The War of 1812 (referred to as the "Second War of Independence" by some US historians) was a 32-month military conflict between the United States on one side, and Great Britain, its colonies and its Indian allies in North America. The outcome resolved many issues which remained from the American War of Independence, but involved no boundary changes.

The United States declared war in 1812 for several reasons, including trade restrictions brought about by Britain's continuing war with France, the impressment of American merchant sailors into the Royal Navy, British support of American Indian tribes against American expansion, outrage over insults to national honour after humiliations on the high seas, and possible American interest in annexing Canada.

This shako could easily be associated with either campaign and many more from the Napoleonic period.