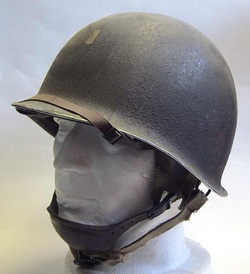 509th PIR M2 Helmet
The shell has been refurbished from an original McCord WW2 helmet, it is a front seam, stainless rim, swivel bail M1 model converted by us to a fixed 'D' Bale M2, as used by the USA 509th Parachute Infantry Regiment Airborne in WW2.

The painted decals are identical to the WW2 versions, in size and placement. The 'Geronimo' or 'Ginger Bread Man'  is the unit identifier of the 509th PIR and the helmet has very nice original WWII matt olive drab green and there are a few nice stress fractures showing the original age of this helmet. We have added the NCO stripe, anti-gas paint and genuine ww2 medical tape.

There is an officers 'tick' marking to the front and ETO 'stripe' to the rear. This represents a battlefield comission. The main paintwork is untouched and in 'as found' condition making this helmet much more sought after! Being original it has of course got small small dents, stress marks and rusting all adding to the character of the helmet.

The liner is a genuine St Clair fibre liner with cut away sides. This liner came from a rejected batch where the sides are lower than normal. We have added the early war rayon webbing, headband, chinstrap, 'A' yokes, DOT studs and chincup. These have all been suitably aged.

M2 Helmets are impossible to find at an affordable price, genuine examples run into thousands of pounds. This recreation is probably one of the best in the world allowing you to own a copy at a fraction of the price.

Shell:
The shell is original WW2 converted to M2 'D' bale by us.
The 'D' bales have been shaped as accurately as possible.
The main paintwork is original WW2.
We have added the anti-gas paint, NCO stripe, officer tick & red Geronimo's.
The medical tape is genuine WWII and added by us.
The chinstraps are reproduction DOT male type and added & aged by us.

If you think the 'Band of Brothers' had it tough in WW2 read about the 509th PIR here.
If you want to purchase this item please email us, there is no shopping cart. This prevents multiple buyers trying to purchase this unique and one stock item. First come first served, but we can make up others to your specification.
Copyright© 2022 www.WarHats.com