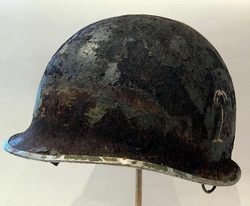 The shell has been refurbished from an original WW2 helmet, it is a front seam, stainless rim, swivel bail M1 model converted by us to a fixed 'D' Bale M2, as used by the US Airborne in WW2.

The painted decals are identical to the WW2 versions, in size and placement. The palm tree is the unit identifier of the 551st PIR and the helmet has very nice WWII matt camo green multiple layer paint finish,
with lots of rusting. The ideal battlefield found helmet.

There is an officers 'tick' marking to the front and ETO 'stripe' to the rear. The main paintwork is untouched and in 'as found' condition making this helmet much more sought after! Being original it has of course
got small small dents, small holes, stress marks and rusting all adding to the character of the helmet.

There is no fantasy about the markings they are all based on an original helmet and the helmet itself is a WW2 M1 version. So you are getting a refurbished shell & replica bale & stencils M2 helmet which these days are impossible to find at an affordable price.

The battalion arrived in Italy in April 1944. On August 15, 1944, Operation Dragoon began. At 1800, the 551st jumped into combat. Their jump, which was codenamed Operation Canary, was the first daylight combat jump in United States history. August 15th marked the beginning of a long stretch for the 551st. They were to see continous combat until November 17th, 1944. This marked another milestone for the 551st. This period marked the longest stretch of combat by any US Airborne unit in the European Theatre of Operations (ETO).

On August 29, the battalion liberated the city of Nice. The battalion was then assigned to protect the right flank of the US 7th Army in the Maritime Alps. On November 18, the battalion was relieved and December of 1944 found them in Loan, France, where they would see little of their much needed rest.

On December 21, 1944 the Battalion arrived in Ster, Belgium with a strength of more than 800 officers and enlisted men. The battalion was first attached to the 30th Infantry Division, and reinforced the 30th ID's positions around Ster. They were subsequently attached to the 82nd Airborne Division and tasked with supporting the 508th PIR.
They took heavy losses advancing through the Ardennes and then on January 7, 1944, the battalion was ordered to take the small town of Rochelinval, Belgium.

Col. Joerg protested, saying that his men were tired and frostbitten, but his protests fell on deaf ears. No one knows who Col. Joerg talked to but whoever it was, their refusal to reconsider the order, sealed the fate of the 551st. The fighting was fierce and by the time the town had been taken, the 551st PIB had lost over 70 percent of it's complement. On January 27th, 1945, General James Gavin informed the men that the battalion was being inactivated and all remaining troopers would be transferred to the 82nd Airborne Division.