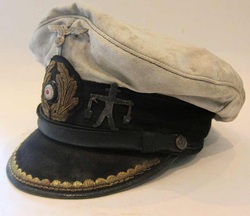 U-Boat Cap U-506
U-Boat U-506, with U-156 and U-507 and the Italian submarine Cappellini, took part in the rescue of crew and civillians after the sinking of SS Laconia in September 1942. About 1500 men were saved by these boats and French ships from Dakar.

U-506 was sunk on 12 July, 1943 in the North Atlantic west of Vigo, Spain, by depth charges from a US B-24 Liberator aircraft. 48 were killed and 6 survived. About 15 men were seen in the water after the boat broke in two. The attacking pilot dropped a liferaft and a smoke flare to assist the survivors. Six men were picked up from the sea by a British destroyer on 15 July, 3 days after the sinking.

This Hat would have been worn by u-boat U-506 captained by Kptlt. Erich Würdemann (Knights Cross winner).

This is a outstanding reproduction of a Kriegsmarine U-Boat Captains Peaked cap with 70+ years of ageing.

The peak, liner and badge etc. all show good wear and the 'Water Carrier' the emblem of U-506 is heavily aged. The 'water carrier' is the traditional symbol of the city of Hamburg - Hans Hummel and the birthplace of both Kapitanleutnant Wurdemann and his boat, U-506.

This is a high quality aged peaked Hat from a U-Boat Captain!  Email us if you want one made to your specification!

Full worldwide insurance is included within the Postal charges, this protects you the buyer!

4% to be added if paying via Paypal