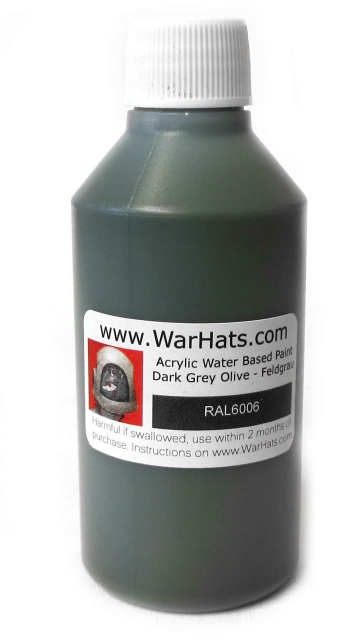 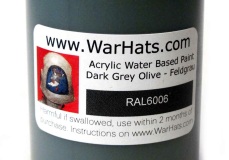 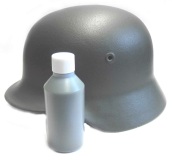 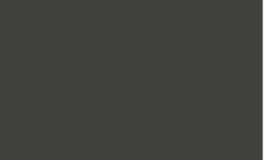 RAL6006 Feldgrau (Field Grey) , used on Army, Waffen SS & Navy Helmets, it came into use after the 'Apple Green' paint and comes in a 100ml container with a mixing ball bearing.

This is an acrylic based paint which means you can water it down with water. We feel this is an acceptable compromise on the original paint so we can legally send this paint to you! This paint is being sold to do one helmet but you will most likely be able to get two helmets painted from it.

This helmet paint has been manufactured to an original WW2 specification and is probably as close as you will get to an original German WWII paint for early war helmets and reissues.

Some Notes on this WW2 German Helmet paint:

It is based on a original German paint - Nummer three from RAL840 B-2 sometimes mistakenly called fieldgrey number three and was introduced in January 1940. It is a darker variant than the post-war RAL6006 (which everyone sells!). It was also used on other pieces of equipment and vehicles. It effectively replaced RAL6003 which is also known as 'Apple Green'. Like all German WW2 paints there were colour variations in manufacturers, batches and year of manufacture!

The RAL colour chart was revised in 1953 and 1961 and thus many RAL colours received other names, so this all adds to the rich confusion of German Helmet paint!

You can get instructions on applying the paint here.